This blog was written by Isobel Owen, Programme Officer at the Anglican Alliance, after a recent visit to Jordan.

On a recent Anglican Alliance visit to Jordan, Janice Proud and I spent time with the local church to learn how they are working to help refugees with disabilities living in the refugee camps, and refugees living in the community.

As of March 2017, 733,210 refugees have been registered in Jordan with UNHCR, with the large majority arriving from Syria (657,621 refugees) and the next largest group from Iraq (62,445 refugees). UNHCR data places Jordan as hosting the second largest number of refugees globally, relative to the size of its population, with 89 refugees for every 1000 inhabitants. 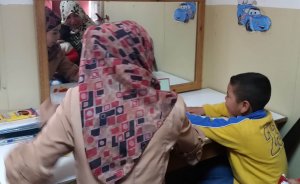 Travelling with staff from the Holy Land Institute for Deaf and Deafblind Children, we visited Za’atari refugee camp in the north of Jordan where 80,000 refugees now live. The Holy Land Institute has been an “early responder” having been involved with assisting refugees with disabilities and their families since the formation of the camp in 2012.

The Holy Land Institute has been working with children with disabilities in Jordan for over 50 years after their foundation by the Episcopal Church in Jordan.  Pictured above is a speech therapy session at the centre.

We saw how the Holy Land Institute, together with four other organisations making up the disability Network, run a disability centre in the camp to provide hearing tests, hearing aids, eye tests and glasses to refugees. The organisations in the network complement each other to provide assistance to cover a range of impairments that cause visual, hearing, physical/mobility and intellectual disabilities, as well as neurological and medical issues. 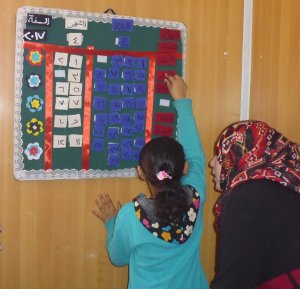 Since work commenced at the centre more than 3,000 children, together with young and elderly people with hearing, visual or mental disabilities, have received help. Each day, 75 children come into the centre to receive help with hearing devices, therapy, education and even just support and friendship from Holy Land Institute staff and the centre’s 14 volunteers.  In the picture (right), a girl with intellectual disabilities shows a volunteer the calendar they have made.  Specialist staff from the Network of Jordanian disability-specific organisations regularly visit the camp.

Given the great needs that exist in the camp, we were very encouraged to see how the Holy Land Institute and the Network have responded to the most vulnerable, regardless of faith or nationality, and brought their expertise and skills in to close a gap in service provision in the camp.

Moving from Za’atari camp, Janice and I travelled to Amman where the local church is ministering and providing the assistance it can to refugees living in the community. We visited St Paul’s Ashrafiyeh (Amman) where we met with Iraqi Christian refugees who are part of the church congregation.

This part of our visit shone a light on those who have taken refuge in Jordan, not by living in the camps – where there is a greater degree of service provision and organisation – but in the community, where they are living in conditions of greater poverty and marginalisation. 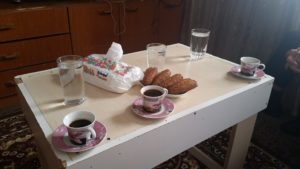 Janice and I were able to meet with Iraqi Christian families in their homes and to hear their stories.  Pictured left is the hospitality offered by an Iraqi refugee family when we visited their home.  Many families had been internally displaced in Iraq since 2003 and have been on the move ever since, leaving major cities such as Baghdad after persecution and intimidation to take refuge in the north of Iraq, only to be driven out in 2014 by Islamic State. Many of the families we met had subsequently seen their homes bombed and had to abandon them, lost their possessions and spent their savings, and had come to Jordan as a final option to reach safety. These families feared living in the refugee camps due to persecution so were choosing to live in greater poverty in the community. In contrast to living in the official camps, many were missing out on access to healthcare and education for their children.

So many of the people we met had lost loved ones to conflict, were separated from extended family across the world and didn’t see any future for themselves as Christians in Iraq for fear of persecution if they returned.

The Archbishop of Canterbury, Justin Welby, visited this community last week and said of his visit:

“The Iraqi Christians I met yesterday say they feel the world has forgotten them, because the focus of the international community is now on Syria. Iraqis, they say, are at the bottom of the list when it comes to resettlement or support. One woman told me that she can endure persecution as a Christian because the Bible teaches that that is to be expected. What she did not expect was that the worldwide church would ignore their plight. As we left I prayed for God’s protection over their community. And I prayed that we, the Western Church, would be stirred up to do something”.

In the face of this context it humbled us to see how the local church was responding with what it had, trying to find options and possibilities, and giving hope to this community that had faced so much trauma and lost so much.

Having made this visit we at the Anglican Alliance have committed to advocating about the situation of Iraqi Christians in Jordan to UNHCR, NGOs and Catholic and Anglican agencies that operate in Jordan. We are also making links to disability organisations to see how refugees with disabilities living in the community can receive assistance in the way that there is provision in the camps. The Anglican Alliance is making further enquiries about refugee resettlement of Iraqis from Jordan where churches in the Anglican Communion are part of refugee community sponsorship schemes.