Individuals and communities can be seen to be thriving, not just surviving, as churches in Zimbabwe engage with their communities using Church and Community Mobilisation and other participatory processes.

Communities in Zimbabwe have suffered endless shocks in recent years, due to the political crisis and the impact of climate change. Generally people are surviving, but not thriving. However, using a range of participatory processes, churches in different parts of Zimbabwe are enabling their communities to live life to the full, to cope better with shocks and to feel stronger as individuals, as churches and as communities.

In January 2018 church leaders from Anglican and other churches across Zimbabwe gathered to explore what it means for individuals and communities to be resilient, to be able to withstand the shocks that are inevitable in life and to thrive despite the challenges. They were joined by a small group of partners, local and international, who support them in their work, including the Council of Anglican Provinces in Africa (CAPA), Christian Aid, Episcopal Relief & Development, Mothers’ Union, Tearfund and USPG, as well as the Anglican Alliance.

Janice visited St Christopher’s Church, Rugare, Diocese of Harare, where the Mothers’ Union has led the Church and Community Mobilisation Process (CCMP). Here she reflects on the stories of hope and transformation she encountered. “A young mother said that women traditionally stay behind to look after children, but now they are also doing projects and benefiting, providing for children. Another said that she had benefited a lot from CCMP; it has allowed children to go to school and be fed. Another talked about CCMP bringing unity to the women, with no segregation on religious or political lines as previously.”

“It was obvious from the dynamics within the community meeting that everyone felt part of the community, valued, respected, included. This included those living with HIV, the elderly, young mothers and young people,” said Janice. “A great example of this was Leobah Musikavanhu, who translated for the visitors with skill and energy, a task usually assigned to men. I have never seen it done by a young lady.”

You can see more about how the resilience of this community has been transformed through CCMP in this video.

Back in Harare, participants shared the key stories from their field visits, identifying the factors contributing to resilience and the impact these had locally.

Surprisingly, these people-focused factors were seen as greater contributors to resilience than factors such as diversified livelihoods and land management – even though these were still identified as important. Resilience is therefore about more than practical and physical preparedness; transformed individuals and cohesive communities are key. The word cloud shows some of the sub categories of resilience that the stories from the communities highlighted. 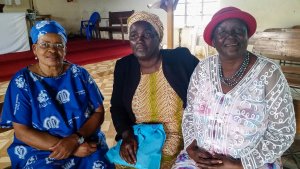 The stories from the communities across the country reported that the participatory community processes improved the resilience of their community. The stories were many and moving, such as increased household income due to individual and group projects, innovation such as making safe cages for road runners (chickens) so as to protect the chicks, increased nutrition and self reliance, decreased stigma for those living with HIV, decreased gender based violence helped by women having their own income and being more independent, increased spiritual growth, strengthened relationships with other community members, increased happiness, confidence and pride, decreased financial concerns.

Of course there were challenges shared as well, but the community had learnt how to come together to talk about issues, to network and work through challenges. Issues highlighted included lack of market linkages, incessant drought, lack of extension services for technical support.

The importance of good facilitation

After visiting two communities outside Harare, Fedis Nyagah, CCMP Coordinator for Anglican churches in Africa based at CAPA, was surprised at the difference in impact of CCMP on the two communities. In one, the church and community were buzzing; in the other the impact was much less. In the second, the CCMP facilitators and the clergy had changed and the process had stalled. Fedis Nyagah had trained the facilitators in 2012, “The quality of facilitation is what affects outcomes” she said. “Facilitators are both born and made. The communities need to identify who they want to be trained as facilitators – who have already emerged as leaders. But the envisioning helps the church leaders to elect those who will be most effective facilitators.”

Later participants reflected more on the selection of facilitators, highlighting the need for facilitators to be from – and nominated by – the community. They also needed to have the time and commitment to engage long-term with the process. They also needed to have desirable qualities such as confidence, being prayerful, being respected, an enabler, a good listener and being innovative. While skills were desirable, it was thought that these could generally be learnt through training, so were not as essential. This was illustrated with an example of a facilitator who had limited literacy, but was dynamic, engaged and passionate, who was doing amazing work in her community.

Support and development of facilitators is also important. The field visits highlighted how CCMP could change attitudes and gender dynamics within the family and the community. However, not all facilitators felt confident to challenge gender norms. They therefore need support and skills to discuss this important issue, as the church can at times reinforce those traditional attitudes. This was just one area that was highlighted where facilitators felt they needed extra skills or resources. Other areas included resilience and disaster risk reduction, and also disability and advocacy.

“If facilitators are trained well, they can run with those issues. Facilitators tend to emphasise the things that they are used to – as they feel confident in those areas,” said Fedis Nyagah. To introduce resilience and Disaster Risk Reduction (DRR) to facilitators, she suggested “We need to make it part of key training to equip facilitators with skills in DRR, the DRR processes and issues. Instead of having a parallel process for resilience and DRR training, it is important to run refresher training on DRR and resilience for facilitators. They will then be able to raise these issues with the community. This will help the communities to be more prepared. It all depends on the facilitator and the overall trainer.”

National CCMP platforms provide an important opportunity for support and development of facilitators. In Zimbabwe the national platform is well established, meeting regularly. They are currently developing a joint CCMP manual for Zimbabwe. “It was really encouraging to hear members of the Zimbabwe CCMP platform committing to revising their joint CCMP manual to include resilience more consciously. They will develop and include bible studies and activities that will bring out these skills” said Janice Proud. “The regular meetings will allow the group to share these skills with other facilitators.”