Home / What is the Anglican Alliance doing to tackle trafficking? 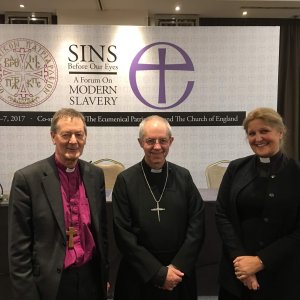 Promoting safe migration and tackling human trafficking is one of the core priorities of work for the Anglican Alliance, as it connects and helps to equip the ministry of the churches across the Communion.

In 2014, the Alliance held its first global consultation on modern slavery and human trafficking, bringing together Anglicans from across the Communion and ecumenical partners to distil their experience of working in this area to build a strategic framework for response.

On 2 December 2014, an historic event at the Vatican hosted by Pope Francis saw global faith leaders, including the Archbishop of Canterbury, unite in signing a Joint Declaration to End Modern Slavery. This committed those leaders to engage their communities in working together. The Archbishop of Canterbury asked the Anglican Alliance to help equip and connect churches and agencies across the Anglican Communion in tackling modern slavery and human trafficking. 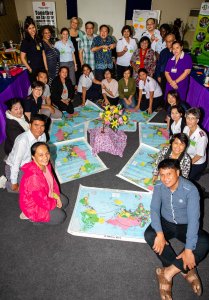 Since the Anglican Alliance began working in this area, it has hosted a number of regional consultations, often in partnership with other organisations such as The Salvation Army. These consultations bring people together from churches across the region to connect and equip them with the knowledge and resources needed to understand how trafficking is taking place in their area and what they can do as the church to respond.

Out of these groups, communities of practice have been formed which enable an ongoing space for people to support each other in their work.

Regional consultations have been held in:

Anglicans from almost fifty countries have taken part in the consultations – shown in the image below.

In the following videos, three participants from the 2018 East Asia consultation in Cambodia share their thoughts about the value of such consultations:

The Anglican Alliance has worked alongside several partners throughout its journey. These include:

The Salvation Army:  The Anglican Alliance has learnt much from our partnership with The Salvation Army, which has been tackling modern slavery and human trafficking since its beginnings in the 19th Century. We have jointly convened regional consultations around the world and developed the Freedom Framework together along with other resources. The Salvation Army is deeply committed to this work, with a global task force and focal points in each of its territories.

Fifty Eight: Fifty Eight partners with organisations and individuals to promote ethical supply chains to achieve work that enhances quality of life, free from exploitation. Fifty Eight has developed a mobile app called Just Good Work. This is designed to help migrant workers looking for work overseas, providing them with access to information about every step of their employment journey, from the recruitment process to their return home. It aims to ensure workers are fully educated about the work they will undertake in order to make informed choices. The app is free and can be used offline where there is no internet access. The app is currently available in source countries Kenya, Uganda, Tanzania, and destination countries Saudi Arabia and Qatar. They are working on expanding to Nigeria and South Africa and other countries, as well as adding new destinations to Kuwait, Bahrain and Oman.

Stop the Traffik: The Anglican Alliance has partnered with Stop the Traffik in particular to support their groundbreaking work on intelligence-led prevention using technology. Through their Stop App, they are building a rich picture of the trends, hotspots, routes and networks of human trafficking on a global scale. With greater intelligence, they are generating targeted action to disrupt human trafficking networks at their source.  Stop the Traffik also run targeted awareness raising campaigns.