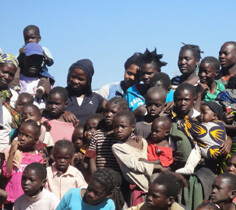 To improve the wellbeing and livelihoods of people living in our communities.

We use Participatory Learning Action (PLA) approach which is traditionally used in rural communities for learning and engaging with communities so they can take action on the challenges and issues they face.

– We begin by making officials aware of our project objectives at District level by sending letters and holding dialogues. We later hold public awareness meetings in the community.

– We are identifying target groups who most need our help and interacting with them in order to analyse their situation and learn how best to support them.

– Contracts are drawn up between village governments and later with community groups who are interested in joining a project.

– We form common interest groups who can support eachother and we facilitate them in developing action plans around the need of the group.

– Diocesan staff gave training to members of these groups, based on their needs/interests.

– At the common interest group level we reflect on what we have done so far and how we can improve in the future.

Increased and improved capacity of community members (including vulnerable groups) in intiating and managing their own development activities by using available local resources.

Through the PLA approach, the poor are able to expand their capability to undertake future self help prgrammes through the concept of participation. It has empowered them to foster their own social and economic development so they have become less reliant on external actors.

Communities are feeling positive about their own abilities and motivated to try to improve their livelihoods.