Creator God, out of the overflowing of your love you created all things with rich variety and great beauty and entrusted us with responsibility for them; grant that we might so value all that you have given into our care that we may strive to sustain its blessings for all people for all time. Amen.

During this week, people around the world are taking part in events to mark World Environment Day (June 5th) and World Oceans Day (June 8th). Both days are opportunities to celebrate God’s glorious gift of creation, which is given not only to us but to all God’s creatures. The two days are also opportunities to reflect on the harm we are doing to creation and to renew our commitment ‘to strive to safeguard the integrity of creation and sustain and renew the life of the earth’, the Anglican fifth mark of mission.

This year, both World Environment Day and World Oceans Day focus on plastic pollution. Distressing images of dead whales, their stomachs packed with plastic bags, of birds and other animals trapped in plastic and of vast areas of oceans littered with plastic debris are waking the world up to the urgent need to address the problem.

We all need to take action. How can we do so? Here we share a new Sunday School resource and some examples from around the Communion about how Anglicans are taking action to combat plastic pollution. 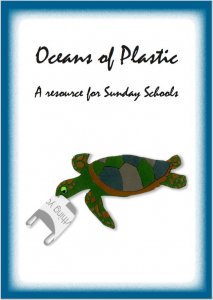 Oceans of Plastic has recently been co-produced by Green Anglicans and the Anglican Communion Environmental Network with the Anglican Alliance. The materials are designed to help children understand the wonders of God’s oceans, the harm plastic causes and the actions we all need to take to protect the oceans and the creatures that live in them. You can download the resource for free here. It can be used at any time of year but is especially suitable for use now and during the Season of Creation (1st September – 4th October).

Until July 31st Green Anglicans are running an art competition to go with the resource. Children and young people are invited to draw or paint an image on the theme of “Oceans of Plastic”. The winning images will be shared on social media and used in future materials. Please send your picture to greenanglicans@gmail.com with a short description, your name, age and country.

St Christopher’s Cathedral in Bahrain is already planning to use Oceans of Plastic in September in the run up to their Harvest Festival. It’s part of their wider move to become ‘a greener cathedral’  which also includes the introduction of a plastic recycling bin for the many groups that use the cathedral’s premises.

Meanwhile at a recent meeting in Fiji, the regional primates unanimously agreed to speak out and support the banning of plastic bags in the region. Reiterating the message, Archbishop Allan Migi of the Anglican Province of Papua New Guinea said ‘plastic bags are not only eye sores on the land defacing our natural beauty and environment but [also] kill our fishes in the seas, our main source of food in the Pacific Ocean, and their ocean habitat’. Archbishop Allan is promoting the use of ‘bilums’ as an alternative to plastic bags. Bilums are knitted string bags usually made by women from either traditional bush strings or wool bought from shops. Archbishop Allan highlighted that using bilums is not only eco-friendly in terms of the biodegradability of the materials used to make them, but also encourages skills and creativity and provides a source of income for women and their families. The bilums can be used many times over if carefully looked after and can be mended if a string becomes loose.

Similar creativity and enterprise is apparent in Zimbabwe in a plastic recycling project based at St Mary’s Chitungwiza, on the outskirts of Harare. The Mothers’ Union, who lead the project, held bible studies about plastic and encouraged people to pick up plastics. They then collected it all together, took it to be weighed and exchanged it for money. This was done initially as an income-generation project with the money raised helping fund floor tiles and a ceiling in the church. However, the project has also had the added advantage of improving the environment. And the success of the plastic collection has led the church to go out into the community to organise a litter pick by the shopping centre. The municipality helped with equipment, such as gloves, bags, and transport to take the litter away. They also did a litter pick at the entrance to the local school and the school has now taken over doing this. So there has been a real culture change and the local government has now implemented local regulations on littering, with severe fines.

Some may question the value of such small-scale actions. In an age that requires urgent action at a global level do they really make any significant difference? Isn’t it just a tiny drop in a vast ocean?

But Jesus said,“Whoever gives one of these little ones even a cup of cold water… will not lose their reward” (Matthew 10:42). Small actions matter. According to Jesus, none is too small. Small acts of celebration and defiance offer an “affirming flame”. They are encouragements… a sign of belief… an act of communion. They say, “here I stand” and invite others to take a stand too. They can be inspiring, sparking new awareness and commitment in others, as seen in the example from Zimbabwe. And who knows where such small steps might lead… to minds changed, new possibilities understood, different choices made, new activists and leaders forged.

So this World Environment Day we celebrate these actions from around the Communion and thank all those involved for their leadership and example.

Please share your own stories with us of what you are doing to tackle plastic pollution or care for creation more broadly. Email us: anglicanalliance.comms@aco.org

The collect at the top of this post is written by Green Anglicans and can be found along with other creation care liturgical resources here.

The Anglican Alliance has further prayer resources here (prayers based on the fifth mark of mission and a prayer in Union with Creation) and here (A prayer for the Earth).