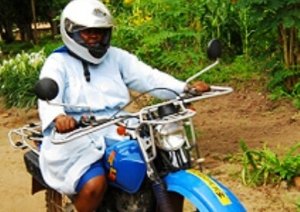 Most health care in rural areas of Tanzania is delivered not by doctors but by nurses based in a small number of village dispensaries. The challenge then is to provide care for the thousands of people who live far away from a dispensary.

He then trained the dispensary nurses and the peripatetic eye-nurse who were to use the motorbikes. The course covered basic maintenance and how to ride in sand, in water, over rocks! There is only one tarmac road in the area. After that it was over to them with Edmund making regular visits

Since then the number of bikes has been increased to six and they have covered over 110,000 kilometres. Each motor bike costs only about £300 a year to run. They are based at Rondo, Chidya, Mtandi, Luatala and Newala.

“It was Sunday about 5 in the evening, my mobile rang. I was told that there was a pregnant mother and her labour pains had started but she had no way to make the journey here!

“I had to go off in a hurry to the district hospital to fetch what was needed. I then went on the motor bike to the village of Mtangalanga, about 5 miles away. When I arrived there I met the mother who was in labour and because I am also a midwife I carried out a physical examination and found she was three-fifths dilated. I was able to help her and happily she produced a little girl weighing 3.2kg.”