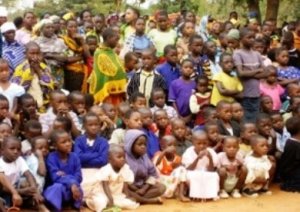 The Carpenter’s Kids is an orphan support program operating in the Anglican Diocese of Central Tanganyika (DCT). Surveys suggest that there are at least 200 HIV/AIDS Orphans and other vulnerable children in a typical parish in DCT. An HIV/AIDS orphan is defined as a child that has lost one or both parents to HIV/AIDS. Other vulnerable children may have been abandoned by their parents or orphaned due to other illnesses.

It is estimated that that there are 40,000 or more HIV/AIDS Orphans and other vulnerable children within the diocese. This problem extends throughout Tanzania, where the total number of HIV/AIDS orphans is estimated at 1.2 million. Without parental support, these children are unable to afford the uniforms and supplies necessary to attend school. They may be ostracized from their peers and end up on the street.

Mission: Partners engaged in God’s mission; transforming the lives of children, communities and the world.

Vision: To ensure that each child in the program who has been adversely affected by the loss of one or both parents due to HIV/AIDS or other serious illness has access to education.

The program ensures that each child in the program who has been adversely affected by the loss of one or both parents due to HIV/AIDS or other serious illness has access to education. Each Carpenter’s Kid receives a school uniform, a pair of shoes, and school supplies each year. The children are also given breakfast on school days.

Thanks to outside donations, each child is also provided with two mosquito nets for their family. Outside funding also provides access to emergency healthcare and the opportunity for secondary ;education or vocational training.

Each parish or organization that chooses to support a link parish in the Diocese of Central Tanganyika makes a commitment to do so for five years. Through this support, at least 50 Carpenter’s Kids in each parish are given the opportunity to attend primary school. Supporting parishes and organizations may choose to sponsor a DCT parish on their own or join with others to share the commitment.

The first DCT parish joined the program in May 2006, and the following years brought a steady increase in growth and support. As of September 2011, The Carpenter’s Kids program has been implemented in 116 parishes, supporting a total of 6,625 children.