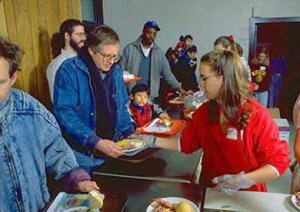 The Church of England

CHAT was formed at the end of 2008 as a response to the recession. It is an ecumenical group with Anglican, Baptist, Roman Catholic and Methodist Church representatives as well as leaders from the Salvation Army, the Elim Church, the Christian Life Centre and other denominations.

In 2008, seasonal workers in the soft fruit industry were laid off due to lack of work. They gravitated to Hereford, where they began begging. At the same time there was a lot of adverse publicity about the workers’ living conditions. This reflected badly on employers, who were themselves under strain. The Council for Social Responsibility Team (CSR) decided to work on both fronts at the same time.

Although it was formed with the initial remit of looking at hunger and homelessness across Hereford City CHAT is continuing to meet regularly and is ready to tackle any issues which threaten to marginalise or discriminate against the most vulnerable members of society.

Our strategy was for the Council for Social Responsibility (CSR) to act as the honest broker and to bring together all groups concerned.

Following an initial consultation with senior community figures organised by CSR, subsequent meetings took place individually with only the employers present and a separate meeting with what has become the Churches Network providing social, educational and cultural activities for seasonal workers. By 2010 these two groups had combined and now meet twice a year. It is also attended by statutory agencies and is the only interdisciplinary liaison group in Herefordshire.

The other initiative was to call a meeting of all the Churches in Hereford and other interested parties to examine how best to meet the needs of those with no money who were rough sleeping including the indigenous homeless. As a result a loose federation of Churches came together to set up what is known as CHAT or Churches in Herefordshire Action Team coordinated by CSR.

CHAT coordinates the provision of at least one hot meal every day of the week by eight denominations at their premises. Initially, Churches involved met their own costs of providing the service. We then received support from the Eveson Trusta through a grant of £5000. £3900 was also generously agreed by the Community Development Foundation, Faiths in Action Round 2.

At the same time, in view of the recession a Community Larder was started by CSR as part of CHAT activity and this is open two hours a week using a voucher system from voluntary and statutory agencies. An Emergency Food Parcel Scheme is also available for crisis situations referred by agencies.

A further Community Larder is now operating in Ross on Wye and others are in the planning stage.

Other Churches who have recently been invited on to CHAT are providing a range of facilities including debt counselling.

In 2011 a 3 month Winter Shelter was set up in a local Church Hall and run by a staff and volunteers.