Communities affected by Typhoon Yolanda, which swept across the Philippines in 2013, have been rallying to provide relief to neighbouring islands after another super Typhoon hit the region in October this year.

After Typhoon Yolanda destroyed much of Leyte and Samar in November 2013, The Episcopal Church of the Philippines (ECP) – through its development arm, the Episcopal CARE Foundation or E-CARE, helped devastated communities rebuild following the disaster through housing and livelihoods projects.

Three years later they are giving back. Typhoon Haima hit the north of the Philippines on 19 October 2016. Over 31,000 people have been displaced and 186,000 homes destroyed. The newly established congregation in Sabang Bao, which was set up following the relief efforts of the ECP after Typhoon Yolanda, is reaching out. They have been able to send 240,000 pesos (nearly US $5000) to support the humanitarian response.

ECP’s asset-based development approach, and its ‘Receivers to Givers’ (R2G) policy, has allowed people to see how they can make the most of what they already have and to share their assets with others.

Janice Proud, Anglican Alliance relief manager, visited earlier in the year and said “the delight was clear on people’s faces when completed homes were handed over to households after the hard work of construction. The community was strong having worked together to build the houses, learning new skills and committing regular time to help build each other’s homes.”

Floyd Lalwet, ECP Provincial Secretary and Director of E-CARE, has previously explained the initiative: “Under this programme, the Church no longer pursues a grants-giving arrangement, but all fund support given to any development project are required, at some point, to be granted back and passed on by the receiving community partner, either to itself for new initiatives or to other groups or communities for similar development ventures.”

Following Typhoon Yolanda, ECP development staff rolled out the R2G policy in Sabang Bao. There, most of the households in need of a new home were tenants whose owners did not allow them to build more permanent structures. Land had to be purchased in order to build more resilient homes, and participating households would pay this cost back over time.

Since the project did not bring in any income to the participating households, it was not expected to be taken up. But the staff were pleasantly surprised! Not only were the families eager to proceed, but they volunteered to pay back the cost of the land within months, rather than the three to five years that was initially proposed. The opportunity to own a piece of land and have their own property was a real gift to the participating households. 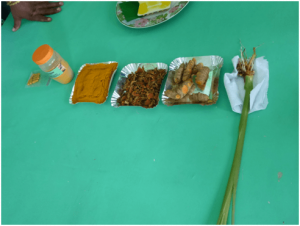 As well as home building, including making their own bricks (see photo), the project also supported community members to enhance their livelihoods, based on their skills and experience. For example, those growing turmeric learned how to process it into spice powder and capsules, to add greater value to their produce.

Since the ECP’s housing project, a new, self-supporting congregation has been established in Sabang Bao, Ormoc City. They are now fundraising for a bigger building to hold their church services.

Just three years ago these communities had nothing. With the help of the Church they have been able to rebuild their lives, becoming entirely self-sufficient, whilst reaching out to support others in need.

“The “Receivers to Givers” initiative really impressed me back in 2013 when communities recovering from a typhoon up-scaled significantly their production of vegetable noodles to send to typhoon-hit communities in Leyte, as more appropriate relief supplies. What a delight to now see that these same communities are already giving back,” said Janice Proud. “It must be really encouraging for disaster-hit communities to know that they are getting support from communities who were in their situation just three years before.”