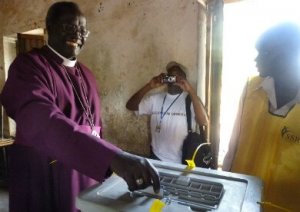 The Episcopal Church of the Sudan

To reconcile Jonglei’s conflicting communities after significant outbreaks of violence which, over recent months, has led thousands of dead across the state.

The work is coordinated a central committee, convened by Anglican Archbishop Daniel Deng Bul Yak. It involves field trips to affected communities to assess the situation on the ground and counsel local people in difficult times. Most people are shocked, traumatised and ready to retaliate after a raid. The church tries to allay fears and deescalate tensions to prevent further cycles of violence. The committee also intermittently organises for local government and traditional leaders across divides to meet in a safe space to engage in dialogue with one another. The committee also meets regularly with the Vice-President of South Sudan, His Excellency Riak Machar Teny, to feedback their information and give early warning of potential violence in the imminent future, making recommendations where possible.

One of the best outcomes for us has been being able to bring politicians together to dialogue in a safe and controlled setting. This is a first and would not be possible without this ecumenical initiative of the churches in South Sudan. The committee also been able to postpone violence for four months last year, saving a lot of pain and suffering for local people. Finally, we have very happily been able to reunite abducted children with their families through the close relationships that we build on the ground. Archbishop Daniel was personally entrusted with supervising the exchange and handover of children to their families.