Anglicans took part in a range of platforms at the Global Summit, which took place from 10-13 June 2014, to highlight the role that faith groups have in preventing sexual violence in conflict. The Anglican Alliance, as part of the We Will Speak Out Coalition, was involved in delivering three events.

The Anglican Archbishops of Congo, Burundi and Rwanda and the Archbishop of Canterbury spoke at panel discussions. A team of Anglicans from different parts of the Communion, including South Asia, West Africa, Europe and from Episcopal Relief & Development in the USA, also participated in the summit activities alongside colleagues from the Anglican Communion Office. In other parts of the world Anglicans contributed to events in their own countries.

The Global Summit brought together government ministers from over 140 countries and representatives from faith groups, civil society, grassroots organisations, the judiciary, militaries and international organisations, to agree practical actions to help put an end to the use of sexual violence in conflict.

Anglican churches and agencies, with Christians and other faith communities, have long been engaged in responding to sexual violence in their communities and providing care and support to survivors. The Anglican Alliance and Anglican Communion are members of We Will Speak Out coalition, which is a global coalition that brings together faith-based NGOs, churches and organisations who have committed to end sexual violence in communities around the world.

Revd Rachel Carnegie, Co-Director of the Anglican Alliance, said, “It was incredibly encouraging to see the wide recognition given to the contribution of faith communities to ending the suffering of sexual violence. The four Archbishops spoke powerfully on the constructive role of the churches, drawing on their own experiences. Our task now is to build on the momentum and commitment of the Summit and to continue to share skills and encouragement across our churches that we can and will make a difference in speaking out and acting together.”

The positive contribution of faith communities on preventing and responding to sexual violence was marked by the Co-Chairs of the Global Summit, UK Foreign Secretary William Hague and UN Special Envoy Angelina Jolie.  In the picture below William Hague meets Archbishop Rwaje Onesphore and Revd Nicolas Guerekoyame-Gbangou, president of the Evangelical Alliance in the Central African Republic.

Here is more on how Anglicans were involved both in London and around the world. 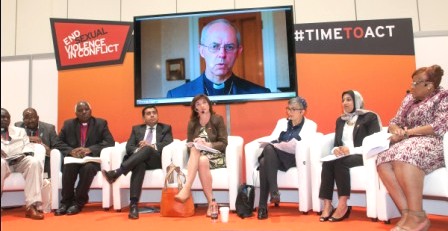 You can watch this event online by visiting http://live.esvcsummit.com/media.html and searching for ‘We Will Speak Out’

Archbishop Onesphore Rwaje, Archbishop of Rwanda, spoke at a multi-faith panel discussion, pictured above, at the Global Summit on the role that faith leaders have in speaking out about sexual violence, as well as addressing the root causes that contribute to it and providing care and support to survivors, including countering the stigmatisation of survivors. The discussion brought together representatives from different churches, the Muslim and Jewish communities and UNAIDS and the UK government.

Archbishop Rwaje spoke on the work of the Church in Rwanda as well as across Africa.  “We have to create a safe space where victims, mainly women, are free to speak openly and find healing.  Faith communities need to deal with the symptoms of sexual violence but also address the root causes.”

In answer to a question on the mindset of church leaders in addressing conflict and sexual violence, Archbishop Rwaje said, “‘Blessed are the peacemakers!’  This is our mandate, which has been entrusted to the Church.”

Rabbi Shulamit Ambalu said, “We must take the language of shame and transform it – all are made in the image of God. We must say to survivors, ‘Shame does not belong to you.’”

The panel discussion opened with a video message from the Archbishop of Canterbury, Justin Welby, in which he spoke of grassroots initiatives he had visited in DRC and the positive contribution of faith communities and their leaders in ending sexual violence:

“Through wonderful organisations like HEAL Africa they treat survivors’ physical injuries. And then individual clergy, trained and equipped, with their wives, begin to deal with the issues… They enable survivors to re-enter society. They show them that they are of unique importance as people; not merely the objects of other people’s lust, rage and disempowerment…the churches are deeply involved in the restoration of relationships – particularly the relationships, the proper relationships between men and women, in which there is equal valuing. In other words, with the right collaboration on the ground, this is an issue where we can, in this world, make a significant difference”.

The Archbishop of Congo, Henri Isingoma, joined an ecumenical panel at the Global Summit to discuss the holistic role of faith communities in preventing and responding to sexual violence in the DRC.  In the picture on the right he addresses the audience.

The DRC has experienced some of the worst rates of sexual violence which have increased during its many years of conflict.  The panel speakers, all from the DRC, drew on their experience of working with churches and church-based organisations to address the multiple challenges of sexual violence in their country.

Archbishop Henri Isingoma, together with his wife Mugisa Isingoma, has led the Anglican Church in Congo in reaching out to survivors, building the church as a safe space for women and addressing the root causes of sexual violence by transforming harmful attitudes on masculinity and unequal relationships between men and women.

Archbishop Henri said, “We need to move people from ignorance to having positive attitudes.  As we are working with Tearfund, we are bringing men, women, survivors together to tell their stories.  We are teaching positive masculinity.  When men heard about rape they would rape in revenge, but after our teaching this first response is undermined.”

Another panellist Thérèse Mapenzi, from CAFOD’s partner The Justice and Peace Commission in DRC, also pictured above, spoke about the need to address impunity and noted the existence of laws against sexual violence in DRC, but outlined the obstacles in implementing them.  She said, “We have laws in the DRC but they are not always enforced or respected.”

Faith leaders are encouraging men and boys to become defenders of these laws and translate them into local languages for local teaching. Faith leaders are central in sharing this messaging and ensuring that local communities hear the call for justice.

And read the full article on the ministerial dialogue. 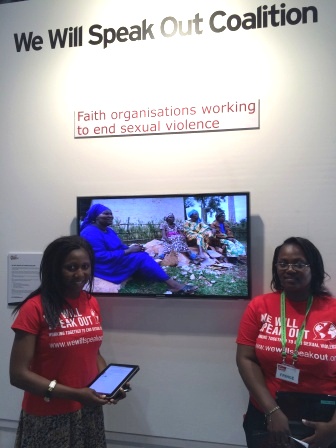 Member organisations of the We Will Speak Out coalition also displayed a photo exhibition and showed films in the Summit fringe silent cinema to show how they are working to end sexual violence.  Some of the team are pictured on the right.

This film highlighting Theresa Malila’s work in Malawi on sexual violence was one of the films shown.  You can see more about Theresa at http://inspiredindividuals.org/individuals/theresa-malila

In Democratic Republic of Congo, Mugisa Isingoma, President of the Union Of Women For Peace And Social Promotion (UFPPS) from the Anglican Church of Congo, spoke at the British Embassy in Kinshasa.

Speaking at an event at the British Embassy in Kinshasa to mark the Global Summit, Madame Mugisa Isingoma from the Anglican Church of Congo spoke about sexual violence in the DRC and how the church is working to prevent sexual violence and respond to survivors.

She said “The multifaceted crisis experienced by the Democratic Republic of Congo for decades has led not only to deep wounds within its communities, but also to stresses and traumas that will affect many people for a long time to come. This has prompted a profound change in behaviour among Congolese people – a negative shift in their way of being and even of living; the population has lost confidence in itself…Against this bleak picture, the churches constitute the only structure which the Congolese people can still trust. First, because the churches identify with the communities they serve. Second, because of their authoritative place among the people. And last, because of the compassion they show in the face of people’s pain, especially in these times of crisis.”

A discussion session was arranged on 11 June in Dhaka, Bangladesh by the Akota project of the Church of Bangladesh to coincide with the Global Summit. The meeting discussed the issues and the importance of the motions of the Global Summit and agreed to work together to end sexual violence in Bangladesh.

The participants proposed that issues of sexual violence be made compulsory in the Church of Bangladesh’s ministries relating to Education, Health, Youth and Women’s Fellowship and that the churches raise their voices to end sexual violence and to challenge stigma relating to survivors.

The Church of Bangladesh’s Akota project has specific programmes to overcome violence against women and is supporting survivors with counselling, mediation, arranging arbitration and providing support to court cases under its Legal Aid Scheme.

The meeting highlighted how sexual violence in conflict in Bangladesh had a deep and shocking impact on communities during its liberation war in 1971. Between two and four hundred thousand Bangladeshi women were raped during the conflict, which left a lasting trauma on those who survived the sexual violence.

Regular updates on the Anglican Alliance’s work with the We Will Speak Out coalition will be on our website at https://anglicanalliance.org/pages/11041