Find out where the march is taking place in your town, country or region.

This mobilisation takes place under the unifying banner “to change everything we need everyone”.  Marches, events and rallies will take place across the globe including cities in Bangaldesh, Brazil, Burundi, Guyana, India, Nigeria, Papua New Guinea, the Philippines, South Africa, the UK and many more.

The largest People’s Climate March will take place in New York City where hundreds of thousands are expected to hit the streets to tell government leaders it’s time for action not words.

Anglican and faith leaders will be among them, calling on world leaders to make decisions that benefit the most vulnerable.  The Anglican Alliance will be sharing news from the Climate March, as well as from the inter-faith events in the build up to the UN Climate Summit.

Find out more about the faith group involvement at the People’s Climate March in New York at http://peoplesclimate.org/faith/ and join us on 58th Street in New York to start the March together!

This international mobilisation demonstrates the growing momentum of the increasingly diverse movement pushing for an economy that works for people and the planet; a world safe from the devastating effects of climate change with clean air, clean water, and healthy communities.

Marches take place just days ahead of UN Secretary General Ban Ki-moon’s historic Climate Summit, where government leaders from around the world are expected to signal that climate change is back on top of the political agenda.

The Anglican Alliance is working with churches across Australia and the Pacific to build on the momentum around the UN Climate Summit and focus attention towards the G20, which is being held in Brisbane, Australia, in November this year.

Tagolyn Kabekabe, the Alliance’s Regional Facilitator for the Pacific, has been leading on the Oceans of Justice campaign, which is asking the Australian Government to put climate change on the G20 agenda. She said:

“We’ll be looking to the G20 to accelerate the ongoing transition from fossil fuels to renewable energies, as part of a global effort to tackle dangerous climate change and secure the new jobs, clean air and economic benefits their nations demand.” 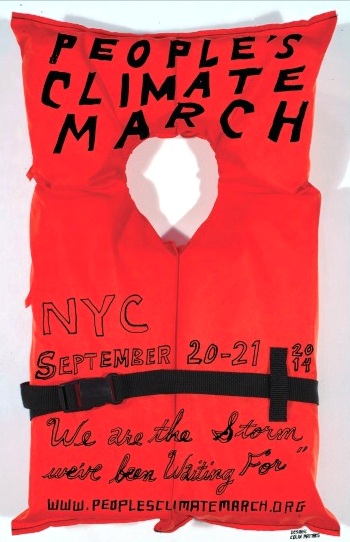 Pacific Islands face a particularly perilous outlook as sea levels rise, destroying homes, crops and livelihoods. Islanders are calling for worldwide support on the Oceans of Justice petition so that they can hand the Australian Government a legitimate and clear ask for action on climate change at the G20.

With climate action increasingly acknowledged as a “no-brainer”, global public mobilisations, like those planned for this weekend, will continue as long as governments fail to take concrete steps on the journey to create the fairer, cleaner, and safer world.