“Love those who have been sick and their families, accept them, tell them that they are welcome. They are people that have been resurrected like Jesus”, The Most Reverend Justin Welby, Archbishop of Canterbury.

The Church in the Democratic Republic of Congo (DRC) has, this week, been further building its capacity to respond to the Ebola epidemic, which is devastating communities in the north east of the country. A Training of Trainers workshop took place in Goma to equip church leaders in the use of the newly revised manual “La foi en temps d’Ebola / Imani wakati wa Ebola” (“Faith in a time of Ebola”). Churches are keen to be more engaged with their communities in fighting Ebola and this illustrated, practical and Bible-based manual has been developed to resource church leaders to do so more confidently.

The current Ebola epidemic started in August 2018 and is the largest outbreak that DRC has experienced. To date there have been 3,243 cases of Ebola in 29 health zones in North Kivu, South Kivu and Ituri provinces. Tragically 2,171 people have died from Ebola, but 1,071 have survived. With new treatments available more people could survive if they accessed treatment sooner.

However, there is fear, mistrust and resistance to Ebola surveillance and treatment procedures, particularly in rural communities. It is these issues that churches are keen to tackle. Respected within their communities, church leaders are well placed to listen to the concerns of the community, share accurate information about Ebola and treatment procedures, and help change attitudes.

A recent statement by religious leaders of the Eglise du Christ du Congo, the union of 64 Protestant churches, on the state of Ebola in DRC includes the following perspective: “As far as popular resistance is concerned, it is due to the lack of information, the unworthy behaviour of the actors in the response, the insufficient use of local human resources, the tendency to make the response a career, the delay in testing samples of cases far away from laboratories, unexplained selection of suspected cases and the politicization of response”.

This week Archbishop Welby and workshop participants visited Ebola treatment centres to hear first-hand from patients and staff about their experiences and to see the effectiveness of the medical interventions.

In a radio interview, Archbishop Welby was asked about his impressions. He replied, “It is complicated, as a question. Firstly the tragedy of Ebola, sadness is the first impression, sadness for all those who suffer from this virus, and for their families. The dedication and courage of those caring for them, the doctors, the caregivers. And thirdly it is not a place of death, but a place of hope. I spoke with a boy of about twelve years, who is suspected to have the virus. He is waiting for a diagnosis. I said ‘Are you afraid?’ He said ‘No, I have strength’. This is typical of the atmosphere at this treatment centre, strength, hope, resurrection. People must not be afraid to go there the moment they feel sick, the moment they feel sick. As they will be respected, they will be helped by doctors, by psychologists, by everyone.”

“La foi en temps d’Ebola / Imani wakati wa Ebola” was developed by Professor Isaac Muyonga, Medical Director for the Baptist Community in the Centre of Africa (CBCA) and Bishop Michael Beasley, an epidemiologist and Bishop of Hertford in the Church of England. The initiative was one of Bishop Michael’s first activities after becoming the lead in relaunching the Anglican Health Network. The resource enables church leaders to talk not only about the facts of the Ebola epidemic but also about the issues and beliefs that are stopping people engaging with the prevention and treatment interventions. 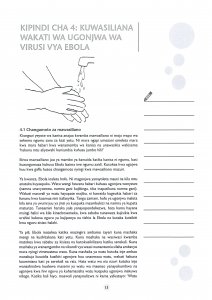 Over the last few months the manual has been trialled and reviewed by church leaders in DRC. It has now been revised in Swahili and translated into French. It will be shared freely for local printing and use.

The manual has also been reviewed with assistance from the London School of Hygiene and Tropical Medicine, whose director, Peter Piot, is the microbiologist who helped discover the Ebola virus in 1976.

What has the role of the Anglican Alliance been?

The Alliance was also able to raise some support from Episcopal Relief & Development to enable the Service Medicale of the Eglise Anglicane du Congo to share Ebola prevention messaging through the churches, clinics and health posts and schools in the affected and neighbouring dioceses. This included setting up hand washing stations at clinics, schools and churches in the main towns.

The Alliance also helped connect people for the trialling and revising the resource manual.

Writing to Janice Proud, Revd. Ngango, the Service Medicale Coordinator  from Beni said, “We sincerely thank you for this good initiative to involve the Church in the fight against Ebola in our sub-region…. Once again, we reiterate our thanks for your love for people in difficult circumstances”.

Janice Proud says, “We were glad to support the development of the Bible based Ebola resource and the training this week, ensuring that there was good ecumenical engagement. This was a key strength of the response in West Africa, all the denominations and faiths were speaking out together with the same message and doing so collaboratively.”

How important were faith communities in overcoming Ebola in West Africa?

“In West Africa, the role of faith communities was critical to overcoming the epidemic”, Janice Proud said. “Only when faith communities, which actually understand the culture, got involved was it turned around.”

Janice explained that this was because there were a lot of traditional practices, particularly around washing bodies, which were banned by the authorities under the strict medicalised approach to containing Ebola. They did not take into consideration the cultural importance of these practices. Bodies were also being buried in mass graves, without markers, causing further distress to grieving relatives. As a result, people were not reporting cases, covertly continuing traditional practices (including washing bodies) and burying their dead under cover of darkness, resulting in further spread of the virus.

However, when faith communities were brought into the conversation, they were able to work with health officials to develop safe and dignified burials, which respected local traditions, but which were medically safe. Figure 1 shows the incidence of Ebola cases by month in Sierra Leone and Liberia and the date by which faith leaders were fully engaged in behaviour change (grey dotted line).

A story about the Church’s role in the West Africa outbreak can be found here.

For participants in the training as they share the “Faith in a time of Ebola” manual in their churches, schools, youth and women’s groups.

For the Church in DRC as it engages in this challenging but vital work.

For the country as it faces not only the Ebola epidemic but also poverty and ongoing conflict.

God of all hope,

we cry to you for all who wrestle with Ebola.

Your healing to the sick,

Your peace to the fearful,

Your welcome to the dying and

Your comfort to those living with loss.

bless those many loving hands

That bravely offer care and hope.

God of healing, whose Son healed those who were brought to him,

Hear our prayer for the peoples of DR Congo suffering from the Ebola outbreak.

Inspire and enable your church to be a source of healing, comfort and hope to those affected,

and an agent for the education and equipping of communities to stop the spread of this disease.

For the sake of your Son, Jesus Christ, our Lord.

Adapted from prayer USPG published in support of those affected across West Africa in 2014.