A reflection during the Season of Creation from Michael Roy, Anglican Alliance South Asia regional facilitator.

The Church of Bangladesh is reaching out to poor farmers to help them adapt to the extreme weather changes that are affecting their crops and livelihoods.

A Climate Change Adaptation (CCA) project in Chapai community is just one of the many efforts that is supporting people living in a particularly drought prone area.

The Church’s practical support has seen a major change for those living off the land, and has encouraged people to work together with their community to fight climate change.

Ummenton lives at the village of Amnura Miapara in Chapi. Her family has one-acre of land that was almost useless due to severe drought. They were looking to sell the land, but no one would buy it. The Climate Change Adaptation Project introduced bottle-drip irrigation technology to the family. The technology is simple, but efficient in using less water, which is critical in drought prone areas. The bottle-drip gardening approach goes alongside using organic manures and natural pesticides, resulting in the restoration of the natural environment and limiting the emission of greenhouse gases. The technology has turned Ummenton’s barren land into a once again productive resource. 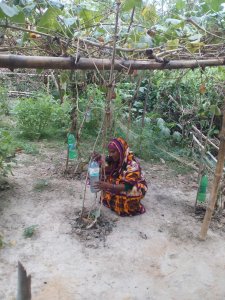 Ummenton, pictured right, said, “I am very happy to be associated with Church’s social development programme in this area. By becoming a member of a Community Development Group, I am getting various trainings on climate change adaptation, including the technology of bottle-drip vegetable cultivation, I have benefited a lot. My dream is to cultivate more by more bottle-drip gardening in my homestead throughout the year for increased additional income to purchase a cow. The project has given us life and hope for the future.”

The technology is now incredibly popular in the region and many farmers, particularly women, are using it for homestead gardening.

Training on adaptation and mitigation has been given alongside advocacy skills workshops, which have helped communities engage with their local government and other departments to see better policies put in place to help farmers adapt.

The project currently covers 109 villages and 2400 families, who were identified as most vulnerable to the chronic drought. Learning from this pilot programme, the project will later be run across the Barrindra tract.

Communities have been incredibly receptive to the Church’s outreach, appreciating the participatory approach of the Church and its integrity. For example, where water shortage was a major problem for the people living in the region, the project has installed a deep well, created a filter for drinking water, re-excavated ponds to use as water reservoirs, and introduced gardening technology for homestead agriculture. These all have inspired local people to continue to look forwards and improve their livelihoods.

Bangladesh is one of the countries most threatened by climate change, with around 15 million people expected to be made homeless by sea level rise by 2050. Sudden changes in the weather and the increase in intensity of natural disasters are already evident, and are affecting the lives of the most vulnerable first.

Sea level in the southern parts of the country and increased drought in the north-west are bringing the most noticeable changes. Agricultural patterns are changing, and communities are facing new diseases brought about by the changing climate. Food shortage has also become a serious problem.

Climate change and food security have been identified as priorities in every region of the Anglican Communion. The Anglican Alliance works to share ideas for practical responses as communities adapt to new challenges, while also continuing in climate justice and advocacy.