He calls for sustained prayer, for advocacy on an immediate peace process and for humanitarian support from across the Anglican Communion.

Archbishop Daniel describes the desperate situation of conflict in which at least 1000 people – and likely many more – have lost their lives and over 200,000 people have been displaced.

He gives an account of his visit to Awerial to witness the situation for the communities displaced by intense fighting in Bor. Some are occupying churches and schools and others are living under trees.

As Archbishop Daniel writes in his letter: “The situation is desperate as there is no clean water to drink and little food to eat.” He also describes the situation in Juba, Malakal and Bentiu, with hundreds dead and thousands more displaced.

The churches remain at the heart of their communities, providing all possible support to the displaced people seeking shelter and help, often in places which are hard for international agencies to reach.

The Province has set up an Emergency Crisis Committee which is working with SUDRA, the Church’s local Relief and Rehabilitation Agency, to consolidate a proposal for the humanitarian response in the affected dioceses. 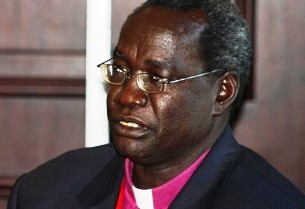 Archbishop Daniel, pictured right, calls on relief agencies and the wider Communion to help the Province in its work to alleviate the suffering of people affected by the conflict: “Some of them are now dying of hunger and diseases, particularly the children … as the humanitarian crisis has reached a breaking point.”

The Anglican Alliance is working closely with the Episcopal Church of South Sudan and Sudan and with its partners around the world to help develop a coordinated humanitarian response through the local churches. The consolidated proposal is expected in a few days and will be posted on the Anglican Alliance’s website.

I am writing this letter to update you about the situation in the Republic of South Sudan.  As you already know, on 15 December 2013 heavy fighting broke out in Juba between the presidential guards and soldiers loyal to the former Vice President Dr Reik Machar.  The incident took us by surprise and resulted in the loss of thousands of lives.

Since then the fighting has spread to some parts of the ten states of this new country, particularly in the Jonglei, Unity and Upper Nile States.  In Juba, over 500 people are feared dead and thousands are displaced.  Although the situation in Juba is calmer now and is in full control of the government, Bor, the capital city of Jonglei state was totally destroyed.  Many people lost their lives – although we cannot give a figure as we are still gathering more information – tens of thousands of the internally displaced people fled Bor across the River Nile to a small village called Awerial for safety.
I myself and the Head of SUDRA (our local Church Relief and Rehabilitation Agency) visited the area and met over 75,000 people (and more are still coming), who were mainly women and children, some occupying churches and schools and others living under trees.  The situation is more desperate as there is no clean water to drink, little food to eat, no good sanitation and a lack of health facilities. Some crossed to Juba and others are still living in the bushes without food or shelter.  Bor has been occupied by 35,000 Lou Nuer militia men who are threatening to march to Juba.  We are concerned and afraid of more lost lives because of the fighting there as most of these militia men are civilians, not professional soldiers, who were mobilised by their leaders to wage war against their own nation and people.

In Malakal, the capital of the Upper Nile state, we received incredible reports of total destruction and looting of the town, with thousands of people displaced and hundreds of lives lost.  Although the town is now in government control the fighting still rages on outside the city.  Most of the people in Malakal are displaced to various areas and living in the bushes, but as the situation is getting calmer some are beginning to return to the town.  We are still gathering more information.

Bentiu, the capital of Unity State where the oil fields are, has witnessed the worst fighting.  Tens of thousands of people were displaced and hundreds more died.  The town is in full control of the rebelling soldiers of Dr Reik Machar.  We are unable to verify some casualties and get more information, but we hope the UN will provide us with more updates of the situation there.  In a town called Akobo, where the UN compound was stormed by the rebelling soldiers of Dr Reik Machar, some Dinka displaced people were killed, including two UN soldiers (the UN might have more information on the situation in Akobo).

I have formed an Emergency Crisis Committee (ECC) under the chairmanship of the Bishop of Bor Rubben Akudit, and comprising of ECSS&S heads of departments of Health, Education, Mothers’ Union, University and Youth, to survey the crisis and make a detailed programme of emergency support for the needy people and gather more accurate information about the situation in the country.  We thank God that Bishop Reuben Akudit has been rescued by the government soldiers and he is now with us in Juba.  Also the assistant Bishop of Bentiu the Rt Revd John Gattek is also with us in Juba.  Our worry now is for the Rt Rev Hilary Garang and his family who are trapped inside Malakal town.  We pray for God’s protection upon him and his family.  We will update you with more information.  In the meantime, I am so grateful for the IGAD that has taken the initiative to mediate between the two warring parties.  All the Churches together are also working hard with good well wishers to try to mediate peace and end the conflict.

Therefore, as Head of the Anglican Communion, I urge you to appeal on our behalf to the rest of the Anglican Communion partners to pray for us and lobby your governments to come in to end this senseless war.  The crisis began as a political struggle within the SPLM party, but it turned into a military struggle which later on took the dimension of ethnic problems.  And we as the Church are deeply concerned and worried that if the situation is not contained it will lead into chaos which will be uncontrollable.  Also we are worried that the fighting may turn into genocide or ethnic cleansing.  We still don’t know how the situation may evolve in the next twenty-four hours, days weeks and months ahead of us.  Also do appeal to some charitable organisations and agencies to please help alleviate the affected people as some of them are now dying of hunger, diseases such as diarrhoea and malaria, particularly the children.  Although there are some NGOs present providing some assistance, the humanitarian crisis has reached a breaking point.  We will update you accordingly.

Please, do pray for us and also ask the international communities to put pressure on the two sides to immediately end the fighting and stop the war, but resolve the problem through dialogue and peaceful means.

The Most Reverend Dr Daniel Deng Bul Yak
The Archbishop of the Episcopal Church of South Sudan and Sudan
and Bishop of Juba Diocese, South Sudan