Research recently carried out in Burundi and Zambia highlighted the challenges faced by refugees with disabilities.  The research has supported the development of a toolkit that can be used by faith groups and communities as they support refugees affected by disabilities.

Janice Proud worked with  the Anglican teams from Burundi and Zambia who were joined by faith leaders, community carers and people with disabilities to learn more about the lives of refugees with disabilities and their challenges and capabilities.  The initiative is supported by DFID’s Humanitarian Innovation Fund.

Two refugee camps in Burundi and Zambia were visited: Kinama refugee camp in Burundi and Mahebe refugee settlement in Zambia.  Workshops and community engagement activities were carried out, and further teaching and discussion about disability was encouraged to widen participation to the local communities.

The Zambian Anglican Council development team, led by Grace Phiri Mazala, co-facilitated the workshops in Mahebe settlement.  In Burundi, the Bethesda project of Muyinga Diocese gave teaching and workshops about disability, which were led by Evariste Hatungimana.  They discussed how people with disabilities can be excluded from full participation in family and community life.  Their dramas, pictured below, were particularly effective as they showed the different quality of life that people with disabilities can have when their families and the community treat them with respect and dignity.

1 Corinthians 12:26 says, “If one part of the body suffers, every part suffers with it; if one part is honoured, every part rejoices.”  Workshop participants were encouraged to reflect deeply on this Bible passage.  They began to share moving stories from their experience of attitudes to disability and the need to build mutual respect and care, and to challenge discrimination.

Other more practical challenges were raised in each camp and community leaders began to discuss how they could reach out to those affected.

Janice Proud said, “The difference between the two refugee camps in Burundi and Zambia was remarkable. In Burundi, Kinama refugee camp was very compact, urban, with houses laid out in grids – each person lived close to their neighbours in blocks of twelve houses.  By contrast, in Mahebe refugee settlement in Zambia, the setting was rural, homes were strung along long roads, each household had a large plot for their home and another larger one on which to grow their food.  As a result, the challenges facing people with disabilities differed too.”

One young mother in Kinama camp has a ten-year-old son who is severely disabled by cerebral malaria.  She cares for him lovingingly but still struggles. As he sat on her knee, dribbling, she explained how isolated she feels without family.  The neighbours leave her alone and she has to leave him by himself to get water and other essentials – she cannot carry him now he is ten.

In Mahebe settlement, the huge distances within the camp were a challenge for everyone, but particularly those with mobility problems. 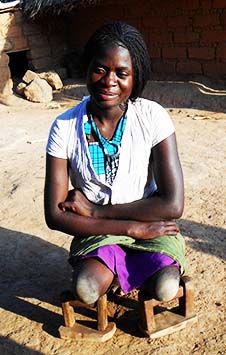 Anita, a young woman from the Democratic Republic of Congo, has severe mobility problems as a result of childhood polio. She would love to continue her education, if she could only get to the local school. The nearest school in this camp is too far away for her to get to, so she has not been able to continue her education since she moved there three years ago.  She believes in developing her capacities, “because the person is vulnerable but viable.”

These and many more issues were presented to the Anglican teams during the workshops and community engagement in Burundi and Zambia.  The picture at the top shows one lady sharing her story.

Faith leaders and community leaders listened carefully to the discussions and reflected on the difficulties that people with disabilities were facing, and their capacity to participate in community life if supported. Participating fully in simple tasks and day-to-day life was often made more difficult for people with disabilities simply because of the attitudes that their family, the community and the authorities had towards them.

The leaders that were present were determined to do something about it. Pacifique, a church leader in Kinama, said, “I am going to preach about it.”

Pacifique had already began to talk about the issues within his community and people were already responding to this.  Later it was noted that his community gave an overwhelming response when people were asked to be interviewed about their situation living with disabilities in the camp.

Janice Proud said, “It was really encouraging to see the commitment from faith and community leaders to respond to the challenges that they had heard from the team and the responses from the people with disabilities.  They were starting to plan how they could continue to profile people with disabilities, as a first step to working with them.  This will help enable them and their carers to participate fully in daily life.”

As a result of this visit and the insights that community and faith leaders have had, the teams have developed a resource that will help faith leaders and community carers to better support people with disabilities in refugee and IDP (internally displaced peoples) camps.  The teams will return to the camps in July to test this resource and develop it further.

In the picture, from left: Anita, Rose, Juliet, and Evariste, from the Anglican Bethesda Project.

Juliet, from DRC, is elected road chairman in Mahebe refugee settlement, Zambia. She fled Katunga in DRC with no family when she was aged 13.  Juliet said, “Everyone knows me, this is my block, I am a good shepherd.”  Here she is introducing Evariste to her neighbours, Rose and Anita.
Rose is from Angola.  She was disabled by a stroke in 2008 and now relies on her daughter to care for her.
Anita, from DRC, was disabled by polio when she was three-years-old.  She desperately wants to access education again.   Anita sometimes teaches the Bible in a church at the refugee settlement.