A ground-breaking initiative between the faiths was marked by an event at the Vatican in Rome on Monday 17th March, when faith leaders signed an agreement put forward by the Global Freedom Network. The joint statement calls for urgent action to eradicate modern slavery and human trafficking by the year 2020.

Anglicans are backing the inter-faith campaign and joining the call for freedom for the 30 million people worldwide who are victims of slavery and human trafficking.

Archbishop Sir David Moxon, the Archbishop of Canterbury’s Representative in Rome, signed the statement at the launch.  Revd Rachel Carnegie, Anglican Alliance Co-Director, has been invited onto the Council of the Global Freedom Network and she signed the document as a witness.

In a statement the Archbishop of Canterbury said:

“We are now being challenged in these days to find more profound ways of putting our ministry and mission where our faith is; and being called into a deeper unity on the side of the poor and in the cause of the justice and righteousness of God.

“For this reason, the new Global Freedom Network is being created to join the struggle against modern slavery and human trafficking from a faith base, so that we might witness to God’s compassion and act for the benefit of those who are abducted, enslaved and abused in this terrible crime.”

Other signatories of the statement included the Chancellor of the Pontifical Academies of Science and Social Science, Bishop Sanchez Sorondo; Dr Mahmoud Azab on behalf of the Grand Imam of Al Azhar, Egypt; and Mr Andrew Forrest, the founder of the large international philanthropic anti-slavery organisation from Perth, Western Australia “Walk Free”. 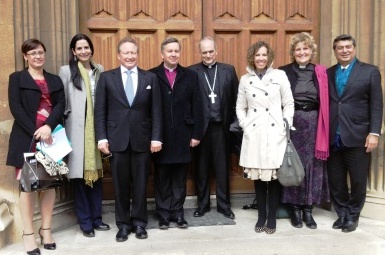 Rachel Carnegie said: “It is a moment of profound significance seeing the faiths come together to unite to see an end of this crime against all our humanity.

“Through the regional consultations, human trafficking has already been identified as a priority for the Anglican Alliance.  Together we will learn from existing initiatives in Anglican Dioceses across the Communion, and also from the experience of other faiths and secular organisations.

“With local churches across the world raising awareness to prevent trafficking and to help victims of slavery, we could truly transform this terrible situation.”

The joint statement urges people of all faiths to take action against the “dehumanisation and degradation” of men, women and children around the world.

It says, “We call to action all people of faith and their leaders, all governments and people of goodwill, to join the movement against modern slavery and human trafficking and support the Global Freedom Network.”

More on the Global Freedom Network can be found at http://www.gfn2020.org/

And a video interview and article from Christiane Amanpour at CNN can be seen here.

In the pictures:
Top: Faith leaders at the Global Freedom Network launch in Rome
Bottom: Revd Rachel Carnegie with the group outside St Peter’s Basilica.