According to the most recent UN reports, over 700,000 people are now displaced by the recent conflict within South Sudan, and less than half have been reached with aid. A further 123,400 have sought refuge in neighbouring states.

During his recent visit to Juba and Bor in South Sudan, the Archbishop of Canterbury has called for the fullest support for the long and hard process of reconciliation. Archbishop Justin commended the Church’s commitment to work for peace and reconciliation and its role in providing humanitarian assistance.

Under the leadership of Archbishop Daniel Deng Bul, Primate of the Episcopal Church of South Sudan and Sudan (ECSSS), the Church has been focused and effective in responding to the urgent humanitarian needs of people displaced by the conflict. ECSSS’ humanitarian arm, SUDRA, has been providing food for children in IDP settlements. It has already registered 20,000 displaced people in order to bring food, water and health care to vulnerable groups, who have not yet been reached by other agencies.

SUDRA is supported in this work by the provincial Emergency Crisis Committee, set up by Archbishop Daniel Deng. The Committee is chaired by the Bishop Ruben Akurdit, Bishop of Bor, a town which has been devastated in the violence.

The Anglican Alliance has helped to coordinate the Communion-wide response, convening a series of conference calls bringing ECSSS together with the family of Anglican agencies and church partners. During these calls, ECSSS has updated the group on the situation and discussed its plans for a response.

A two phased approach has been planned by the Church, in consultation with the Anglican Alliance family and with technical support from Episcopal Relief & Development. In Phase 1, the provincial team will work through the diocesan networks to provide immediate food and medical aid for groups unreached by other sources. Phase 2 will focus mainly on long-term recovery, trauma healing and reconciliation.

Archbishop Daniel said, “We must help feed people today, so they and their children survive: then they will want to listen when we come to talk about reconciliation.”

Revd Rachel Carnegie, Co-Director of the Anglican Alliance, and Canon Grace Kaiso, General Secretary of the Council of Anglican Provinces in Africa and an Alliance Board Member, recently visited Juba to meet with Archbishop Daniel Deng and the provincial team. 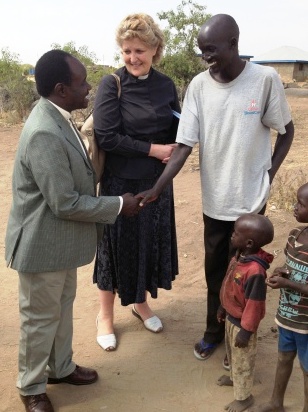 “It was a profoundly moving and inspiring visit,” said Rachel Carnegie. “We witnessed the committed leadership of Archbishop Daniel and his team in mobilising the Church to bring relief and reconciliation. When we visited a group of people displaced by the fighting in Bor, we were also able to see the local church at work, with the priest and Mothers’ Union members mobilising the community to help.”

Talking amid the IDP community under his care, the local Episcopal priest said, “It is most important for the Church to conduct holistic ministry. We need to look into the spiritual and social well-being. We try to help with food and with health care. The Church will also be very instrumental as this community starts to consider returning. People also need trauma counseling. Some have lost loved ones, some have seen dead bodies or people being killed. The Church is the special institution to deliver counseling.”

“I was impressed that despite the pain and the challenges people want to move on and tackle the issues in the country,” said Canon Grace Kaiso, CAPA General Secretary, after visiting South Sudan. “We should come alongside the people, bringing hope that the situation will settle and improve, and reigniting their resilience. The Church is the hope and should act as a bridge across the ethnic and political differences in the country.”

Through SUDRA, the Church is now seeking to give aid to people across the country, reaching different communities in need. In Phase 1 it aims to reach 5,500 households (44,000 people) with food packs distributed by church volunteers and with medical assistance through its church clinics. As the wider international response reaches across the country, the Church will begin on Phase 2 activities.

Funding is already committed through Episcopal Relief and Development in the US, the Australian Anglican Board of Mission, the Mothers’ Union, CMS UK and through companion links in England and the US. The Canadian Church’s PWRDF and Australia’s Anglican Overseas Aid are also coming alongside the Church in South Sudan through the ACT Alliance: Norwegian Church Aid, one of the ACT Alliance implementing partners, has an on-going partnership with SUDRA. Christian Aid and Tearfund are also partnering SUDRA in its humanitarian response.

You can support the appeals to fund the Church’s humanitarian work in South Sudan by following these links:

Anglican Board of Mission 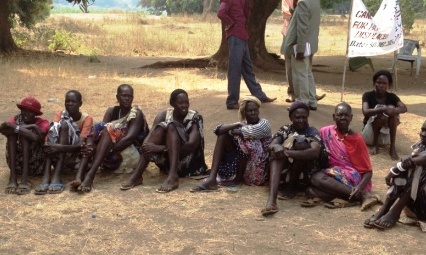